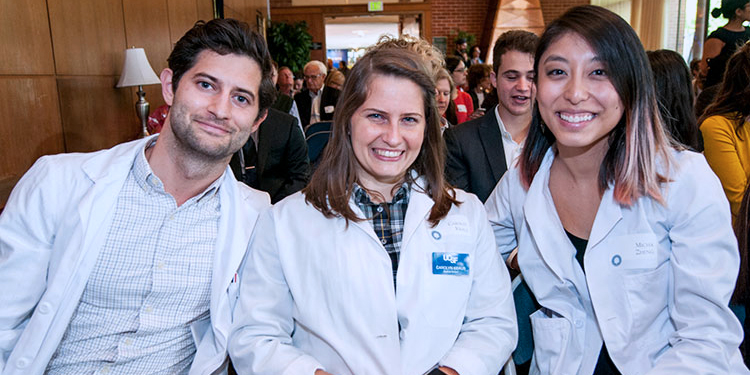 As soon as Collette Auerswald heard about the UC Berkeley-UCSF Joint Medical Program, or the JMP, she knew it was the place for her. She was an undergraduate at Harvard, majoring in social studies while doing pre-med on the side, and trying to figure out how to square her passion for social justice and progressive causes with her desire to become a physician.

“I was kind of an anomaly,” recalled Auerswald, who attended the UC Berkeley side of the program from 1986 to 1989 and is now an associate professor of community health sciences and on the JMP faculty. “I thought maybe I’d be a medical anthropologist because that perspective on health resonated with me a lot more than organic chemistry.”

One day, during a break from her job in a virology lab, a guy sat down next to her, figured out she was a pre-med student, and began telling her about the Joint Medical Program. “At first I wanted him just to go away, I wanted to read my book, and then as he talked, I was like, ‘Wait a minute, what?’ I was totally taken with what he was saying, he had a brochure about the JMP, and he handed it to me.”

The brochure likely contained most of this information: In the JMP, students spend 3 years at Berkeley pursuing a unique case-based, peer-teaching medical curriculum, along with taking public health and other coursework and producing their master’s theses. The students also develop clinical skills through individual preceptorships with physicians working in the community—another break from traditional medical education, where clinical training is generally provided by faculty in teaching hospitals. After their time at Berkeley, students spend two years at UCSF doing the same clinical rotations in various medical specialties as other medical students.

Auerswald was ecstatic to learn there was a program that would allow her to study medical anthropology at the same time she learned medicine. Until that accidental meeting, she’d had no idea that such a program existed. “I call that my deus ex machina moment,” she said. “He gave me this brochure, and then I never saw him again. I was totally freaked out! From that moment, I was obsessed with going to the JMP.”

Since 1971, the JMP has been attracting students with wide-ranging interests, like Auerswald, because of its cutting-edge approach to medical education combined with the opportunity to investigate the social, cultural, and political context of health and medicine. To date, more than 450 students have graduated from the program with Master’s of Science degrees from UC Berkeley along with medical degrees from UCSF.

The JMP currently accepts 16 students a year, and they still exhibit the same desire to combine medicine with the pursuit of equity, fairness, and human rights. Many volunteer at the Suitcase Clinic, a social services agency for the homeless that was started almost three decades ago by JMP students. Last September, JMP students participated in a photo campaign to support people threatened by the repeal of Deferred Arrival for Childhood Arrivals program, or DACA.

In September 2017, JMP students posted a series of photos in a show of support toward the undocumented immigrant communities affected by the repeal of Deferred Action for Childhood Arrivals (DACA).

“Though doctors have traditionally taken an oath to ‘do no harm’, we believe the responsibilities of a doctor must go beyond this promise to also seek justice for those we serve and amplify the voices of those who have been deliberately silenced by society,” the students declared in a statement explaining their participation in the event.

“What I think does differentiate us is the focus on the non-science part of medicine, the humanistic approach to health care,” said JMP director John Balmes, a professor of environmental health sciences. “We value the social determinants of health, and we’re trying to get our students to appreciate the whole person and the environment the person is in in terms of managing their health care.”

John Swartzberg, a clinical professor emeritus and former JMP director, said that the kinds of research projects that students select demonstrates the breadth of their interests and skills. The research component has always been a central component of the JMP, he said, and students are encouraged to pursue topics beyond the strictly medical and biological.

SPH students have organized and volunteered with the Suitcase Clinic since 1989.

“The students have to produce a publishable piece of work, and they can draw from the richness of the Berkeley campus,” said Dr. Swartzberg. “That means not just in basic sciences but also in the social sciences and humanities. They’re interested in the human condition as it relates to medicine, and they do cross-cutting research.”

Last year’s master’s theses exhibited this eclectic range of interests. Micha Yin Zheng, for example, fielded a survey of Chinese and Vietnamese immigrant women to assess their awareness of a traditional postpartum practice of bedrest for a full month; she discovered that the “overwhelming majority” of the survey respondents knew about and participated in this practice. Daniel Patrick Morburg conducted qualitative interviews with health care providers in Brazil, a middle-income nation with a universal healthcare system, to investigate why rheumatic heart disease, a preventable illness, is still endemic in the slums.

Adam Elbaum analyzed a cache of 148 ancient letters to characterize how the Jews living in medieval Egypt described and conceptualized their experience of illness. And Diane Ta-Yoon Jeon pursued a cross-sectional analysis of the associations between specific proteins associated with lung inflammation and pulmonary function outcomes in people with HIV, who are at risk for chronic obstructive pulmonary disease. “This study is a preliminary step toward finding clinically relevant biomarkers for development or progression of lung diseases such as COPD in high-risk populations like HIV+ individuals,” concluded Ta-Yoon in her paper.

In 2016, the future of the JMP appeared uncertain, as the university struggled with budgetary challenges. The program has been given a reprieve since then but funding remains a priority, according to Dr. Balmes. The program is important to California, explained Dr. Balmes, because the state suffers from a low ratio of primary care physicians to population—among the worst in the country.

“We’re providing a good benefit to the state and helping to close the heath care gap,” said Dr. Balmes. “The state needs more primary care physicians who know how to take care of minority, low-income folks who need sensitive and culturally appropriate health care. And we are turning out physicians who provide that care.” Among JMP graduates, 60 percent enter the primary care field and 70 percent remain in California, cited Balmes.

The JMP had its roots in Berkeley’s longstanding desire to play a role in medical education. The openness and ferment of the late 1960s provided an opportunity to try something new and different, and Berkeley opened its doors to medical students in 1972. Although at first the students were not guaranteed admission to UCSF, that soon changed.

“What I think does differentiate us is the focus on the non-science part of medicine, the humanistic approach to health care.”

Sara Hartly, a psychiatrist, experienced Berkeley as an undergraduate in the 1960s. After spending time on archeological digs in Colorado, England, and Australia, and traveling to the Amazon on a scientific expedition, she decided it would be a good idea to obtain medical skills.

Hartly only applied to the new program at Berkeley, which was looking for applicants who were not fresh out of college but had knocked about a bit. “They wanted you to have some life experience, they wanted you to be bit weathered, and that you’d bring this experience to medicine,” said Dr. Hartly.

She knew at the time that she wouldn’t be suited to the regimentation of a regular medical education program. “I sensed the difference between what it was like to be in a traditional medical school, which had a kind of formality and hierarchical and institutional intimidation, and the JMP,” said Dr. Hartly. “And the JMP was more of a small group collegial vibe and we helped each other and there was oxygen in the room, and it wasn’t leaden with standards of what you were supposed to look like and how you were supposed to behave.”

She is still grateful that the JMP accepted her. “I would not be a doctor without this program,” she said. “For someone who is as eccentric as me, someone who is not a traditional student by any measure, it was actually a uniquely welcoming, just fortuitous way to become a physician. I would never have been able to survive any medical school.”

During the first 15 years, the JMP was a free-standing program on campus, without a stable institutional home. In the late 1980s, it came under the umbrella of the School of Public Health, where it has remained ever since. That gave it a unique status in American medical education, said Dr. Swartzberg.

In the early years, much of the teaching was lecture-based, as in standard medical education, although the small class size and more relaxed learning environment always marked the JMP as a different kind of experience. Aspects of case-based learning were added over time. In 1989, Dr. Swartzberg, an infectious disease specialist, became the program’s director of clinical education. He officially implemented full case-based learning for the clinical skills curriculum, although basic science was still taught through lectures.

Another overhaul occurred 10 years later, when Dr. Swartzberg hired Kevin Mack, a psychiatrist at UCSF, to revamp the curriculum. In doing so, Dr. Mack incorporated not only clinical lessons but basic science into the cases. The result, referred to as a “contextually integrated case-based curriculum,” comprised a series of 80 weekly cases that the students debate and dissect. Each week, they are presented a new case study and have to develop the questions to be asked, research the issues, and teach each other what they’ve learned. Then they try to resolve the outstanding medical questions in the case.

“The philosophy is that you’re much more like to learn it if you ask the question than if you’re told it, and the students are teaching each other, so they’re much more likely to listen,” said Dr. Swartzberg. “There are other schools since then that have started to take this up, and it seems to be the way things are moving—students learning medicine by working with cases rather than in classes and lectures.”

Although the case study approach was not really in place when Dr. Auerswald attended the program, the spirit of educational experimentation and openness to new approaches was nonetheless palpable. That collegial atmosphere, she recalled, was what made her own medical education so special—and is one reason she loves being involved now in providing future doctors with a similar experience.

“Medical school is often all about memorizing things and learning a new language and a new set of rules to manage information—it’s all about getting you to walk in step,” she said. “And I was interested in still asking a lot of questions and thinking outside the box and not just learning to walk in step. The JMP offers a way to attend medical school without giving up that sense of inquiry. It’s like having your cake and eating it, too.”

Fresh Perspectives on Health Policy
Thank You To Our Sponsors: