Connecting services for people with complex medical and social needs 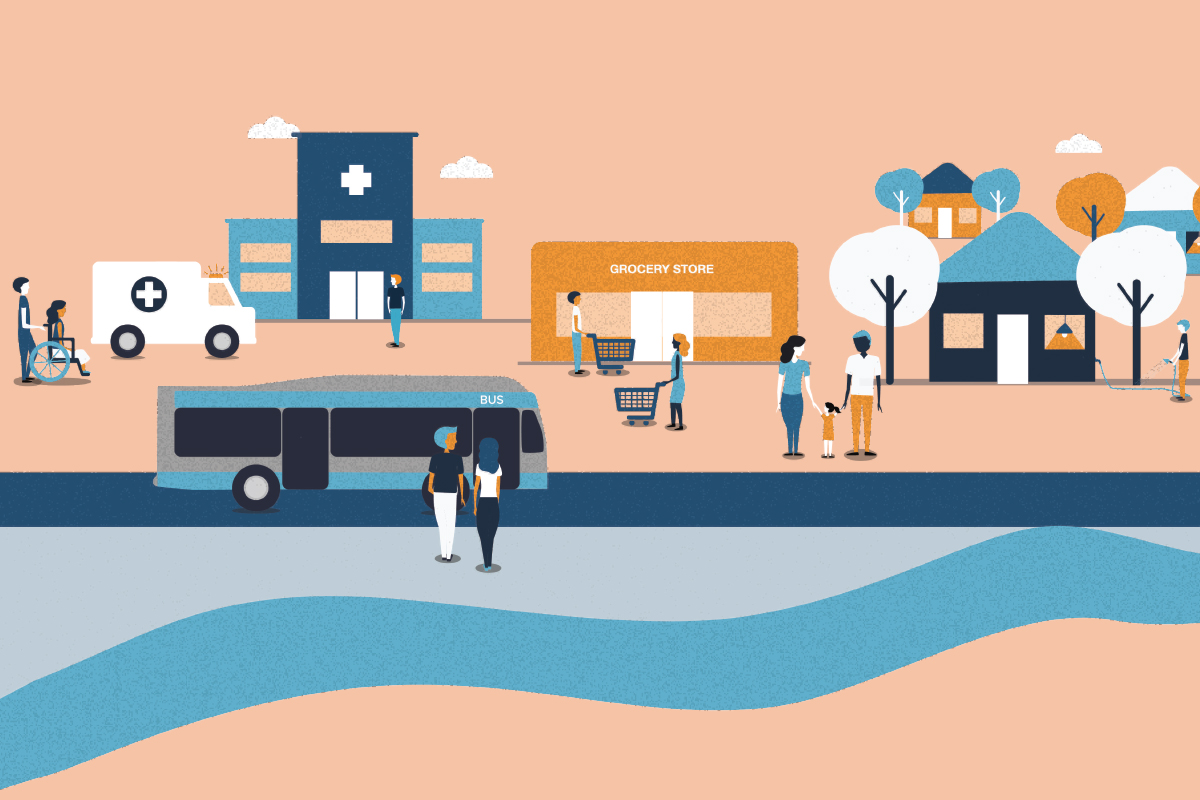 “Our Health Policy and Management faculty are ten years ahead of the nation on health policy issues,” said Hector Rodriguez, Henry J. Kaiser Endowed Chair in Organized Health Systems. As Professor Rodriguez attests, the School of Public Health’s Health Policy and Management Division has always taken a cutting-edge, holistic approach to improving health care delivery in terms of access, quality, and cost. We reached out to our new and veteran faculty to get their expert opinions on a few current topics in health policy.

Connecting services for people with complex medical and social needs

We have long known that social circumstances play a major role in determining health. Social determinants—such as low income, unstable housing, or food insecurity—increase a person’s risk of poor health, and make it harder to recover when someone does experience illness or injury. Addressing social determinants of health has historically remained outside the purview of the health care system, however. Health care organizations have focused on providing medical care, while separate social service organizations (often less well-resourced) have specialized in helping people attain basic resources like stable housing, food, and income.

The clear division between health care and social services may be starting to change, however, with the emergence of innovative programs to coordinate medical and social supports for patients with complex needs. Among the largest is the Accountable Health Communities Model, run by the Centers for Medicaid and Medicare Services, which is starting to test a new process for health care providers to screen patients for social needs and refer to community-based social services. In about 30 pilot sites, spread over more than 20 states, patients enrolled in Medicaid or Medicare are asked questions about non-medical problems they might be experiencing—issues like unstable or unsafe housing, lack of food, transportation or utilities, and risks of interpersonal violence. If patient report concerns, they are linked with social service providers in the community that can help. California is also testing new models of coordinating health care and social services for vulnerable groups of Medi-Cal beneficiaries—through the Whole Person Care pilot programs.

Signs of broader-scale change are also on the horizon. Health care payment models designed to encourage prevention—such as capitated, risk-based, and bundled payments—are accelerating the creative process. In recent years, calls for the health care system to address patients’ social determinants of health have emanated from a range of influential organizations—including the American College of Physicians, the American Hospital Association, and the National Quality Forum. In a recent national survey, 80% of hospitals reported that their leaders were committed to establishing processes to systematically address social needs as part of clinical care.

Managing care that spans multiple organizations and multiple sectors poses a daunting organizational challenge. What we still do not know is how health care providers and social service agencies can work together to most effectively improve health of their communities. Our current research in the School of Public Health seeks to learn from examples where organizations have established productive working relationships.

Impact of consolidation on the California health care system

Each county in California has a market concentration score based on six measures: the average Herfindahl-Hirschman Indices for hospitals, insurers, primary care physicians, and specialists; and the percentages of primary care physicians and specialists working in practices owned by hospitals. The scores are interpreted as a ther-mal gradient on the map, with the cool colors indicating counties that warrant lower concern by regulators and the hotter colors indicating counties that warrant increasingly more scrutiny. (SOURCE: Authors’ analysis of data for health insurers from the Managed Market Surveyor provided by Decision Resources Group (formerly HealthLeaders-Interstudy), for hospitals from the American Hospital Association Annual Survey Database, and for physicians from the SK&A Office Based Physicians Database provided by QuintilesIMS.)

Why are hospitals doing this? They are interested in capturing the referrals that these physicians make to hospitals. They are seeking increased market power over the prices of physician services. These mega mergers will fundamentally change the healthcare system in the United States. No longer will it be clear to consumers from whom they are purchasing care and what are their incentives. When your doctor refers you to a hospital, are they more likely to refer you to the hospital system they are part of, or the one that best meets your medical needs? Although physicians are under no legal or financial obligation to refer patients to the owning hospital, hospitals can influence these decisions in subtle ways including marketing their services to captive physician audiences. A recent study found that “a hospital’s ownership of an admitting physician’s practice dramatically increases the probability that the physician’s patients will choose the owning hospital.” There are also anti-competitive concerns. Will the hospital use its influence on doctors to make it more difficult for rival hospitals to enter or stay in the market?

In March 2018, Cigna Corp. announced that it has agreed to buy Express Scripts for $52 billion, an example of an insurer acquiring a pharmacy benefits manager. In December 2017, CVS, a pharmacy benefits manager, announced its plan to buy Aetna, an insurer, for $69 billion. That same month, United Health’s OptumCare unit, an insurer, agreed to buy DaVita Inc.’s medical group, a physician practice, for $5 billion. The total value of these vertical mergers in California amounts to $126 billion. The Optum-DaVita deal would add 17,000 physicians and other care providers from Davita Medical Group to OptumCare’s 30,000 employed and affiliated physicians. If the CVS-Aetna merger were to go through, 20 million enrollees in Aetna’s various health plans would be part of the merged entity consisting of CVS’s 9,700 retail pharmacies and more than 1,100 MinuteClinics. Similarly, the Cigna-Express Scripts deal would merge the second-largest pharmacy benefit manager in the U.S. with the fifth-largest insurer in the country.

These developments put further pressure on State regulators to carefully scrutinize vertical consolidation, not only from an economic perspective but also their potential impact on patients and delivery of care. The following set of bills in California have been introduced in the legislature:SB 932 proposes  an approval process by the California Department of Managed Healthcare before a merger or consolidation affecting health insurance and managed care plans. AB 595 proposes a similar review and approval of mergers based on their effect on competition, healthcare costs, access or quality of care. Finally, SB 538 proposes new rules on contracts between hospital systems and health plans. Redoubling our efforts to carefully scrutinize consolidation has never been more important for California’s consumers of healthcare.

The U.S. healthcare system exhibits high and widely variable prices charged for similar products and services, with no consistent link between price and quality. This unjustified variation reflects weak cost-consciousness on the part of purchasers and consumers, plus weak competition between producers and providers. Over the past five years, our faculty and graduate students have engaged in a series of studies of purchaser efforts to counter this price variation, collaborating with the California Public Employees Retirement System, a variety of smaller employers and labor unions, Anthem Blue Cross, and other entities. This work is done under the organizational umbrella of the Berkeley Center for Health Technology (BCHT).

Their principal research focus has been reference pricing, or reference-based payment, in which the insurer or employer establishes a maximum amount of a product’s price that it will contribute towards covering. This insurance benefit design is used in the context of wide variation in prices for therapeutically similar drugs, diagnostics, or procedures—and where insurers are increasingly unable to negotiate uniform prices for similar products with various producers. A reference-based payment limit is set at the minimum, median, or other point on the range of negotiated prices within a market of therapeutic class. Patients who use a product whose price falls at or below this limit pay only a modest copayment, while those using more expensive options pay the full difference between the reference limit and the price of their chosen product.

For example, the RETA Trust, a national association of 55 Catholic organizations that purchases health insurance for their employees, found itself paying dramatically different prices for drugs within the same therapeutic class, due to aggressive price increases by both branded and generic manufacturers. In 2013, RETA implemented reference pricing for outpatient drugs as a part of an effort to sensitize enrollees to the cost of the care they use. Following implementation of reference pricing, the average price paid by RETA decreased by 14 percent, generating $1.3 million in savings for the employers. This decrease in spending by RETA was associated, however, with a 5.2 percent increase in consumer cost sharing for enrollees.

The RETA study suggests that reference pricing potentially offers meaningful savings for purchasers in the United States. This cost-savings, however, came with the potential of shifting more of the cost to patients in the form of higher cost-sharing. Reference pricing has several key limitations, and is no panacea for all the challenges of drug or medical purchasing.

As emphasized in our BCHT publications and presentations, reference pricing needs to be accompanied by up-to-date information on the prices charged at different distribution sites (e.g., retail pharmacies, supermarkets, mail order channels) and for different drugs within each therapeutic class. Ideally, drug price information should be available to physicians through their electronic information systems at the time of prescribing, so they can select the low-priced alternative or request an exemption from reference pricing if they feel it is clinically indicated.  When applied to heterogeneous procedures or heterogeneous classes of drugs, reference pricing needs to be accompanied by information on quality as well as price.

To date, reference pricing has been applied only to non-specialty drugs, the well-established treatments for common medical conditions. Specialty medications that treat severe but less common conditions such as cancer, immunological and neurological disorders, and rare ‘orphan’ illnesses are much more expensive than traditional drugs. Competing specialty drugs may have different mechanisms of action, modes of administration, or other features that make it difficult for physicians and patients to switch amongst them based on price. BCHT research currently addresses specialty drugs, including both prices and incentives for continued investments in innovation. To be applied to specialty drugs, reference pricing needs to incorporate evidence from comparative effectiveness research on the incremental benefits and risks of each new drug. These clinical differences then need to be translated into differences in the payment to be offered by the employer or insurer.

Consumers should be required to pay more for an especially expensive drug only to the extent the higher price is not justified by commensurately higher clinical benefit. Patients should have low-cost access to low-priced products within each therapeutic class. They also should have low-cost access to high-priced products to the extent the higher prices are justified by higher clinical performance. If the patient’s preference for a more expensive drug is not based on clinical performance or a special need; however, the patient should pay the difference in price.  The patient retains the right to choose, but a right that is tempered by responsibility.

The Joint Medical Program: Training doctors the Berkeley way
Thank You To Our Sponsors: